Suffice it to say that my cat, Wilson, has had a bad summer.

All through May and June he watched with me as our seventeen year old cat, Lucy — the matriarch of the family — grew sicker and sicker, finally succumbing to pancreatic cancer at the beginning of July.

It’s been almost six weeks and still, every night, he searches for her. He starts at the top of the stairs to the basement, gazing into the shadowy abyss and calling sadly into the dark. Then he descends, searching, searching, his mews growing more strained as he moves about without success. 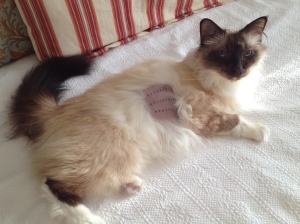 I told a friend about his behavior a few weeks ago and she suggested I sit down and have a talk with him. As ludicrous as that sounds, the idea wasn’t without merit. Last year I’d read several books written by professional animal communicators for a novel I was writing. I’d even gone as far as taking an animal communication class from one of them, Joan Ranquet, author of Communication with All Life.

One of the big takeaways from my research was this: Animals understand far more than might seem possible. Much of their communications is accomplished through a sixth-sense telepathy that starts to make a lot of sense the more you research and experience it. When this is the main method that animals gather information, it opens them up to discovering and understanding a great deal of things.

I read one account of a yellow lab who had become distraught upon the death of the ailing grandparent living at the house. The dog was sulky and didn’t eat for weeks, until the family had a ceremony that included the dogs. During the ceremony, the dogs’ guardians piled several items of the deceased grandfather’s clothes in the middle of the room and said prayers for him in what amounted to a memorial service. During the service, the yellow lab sat on the old man’s former clothes. When it was over, the dog took the grandfather’s hat and shredded it to pieces. When he was finished, the dog walked away, seemingly satisfied. Within a day the dog seemed his old self and began eating normally.

With this in mind, a few nights later I noticed Wilson gazing longingly toward the basement door. I said, “Where did Lucy go, Wilson? Wouldn’t it be nice if we found her again?” As I said this, a picture came into my mind of Wilson trotting over to Lucy and licking her happily on her head. Wilson can be something of a dog at times.

“Honey,” I said, “Lucy died. She’s not coming back.” Something about saying it out loud like that made my stomach spin. Possibilities of reincarnating pets aside, Lucy as we knew her was gone.

Wilson seemed to contemplate this. For the next few days he stopped searching the basement or calling out sadly. Maybe our talk had had some effect.

But no, a few days after that, the searching resumed and only let up when Wilson had a flair up with allergies that required the vet to shave the side of his body to conduct allergy testing. With the help of medication, Wilson’s feeling better now; but his desperation to find Lucy has grown more urgent. He’s even taken to looking for her in the mornings.

He’s a loyal little critter, I’ve give him that.

Has anyone had any experience with a grieving pet? Do you have any advice? 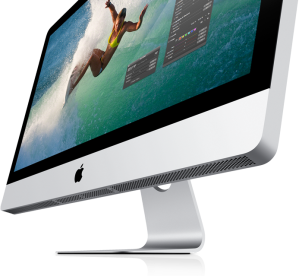 Even before my PC hard drive crashed, I’ve been pining to get a new iMac. Now that I’ve made the decision to convert to the OS X platform, I can hardly wait to get started.

There’s only one problem. These computers haven’t had a hardware refresh in a year and half, so it makes no sense to buy old technology when the new stuff should be coming out in a month or two. So I find myself pawing at the ground like a bull who’s seen a fire engine.

Then I read this great blog post from blogger Ingrid Schaffenburg about how we’ve become a culture of instant gratification. Please take a look at what she has to say. It makes me think that maybe sometimes waiting makes the final outcome all the more sweet.

Okay, so, I’m minding my own business.  It’s the weekend, the first weekend in months that I don’t have anything going, just forty-eight hours to read and write and relax. Then it happens.

I laugh nervously and look from side to side. This must be some kind of mistake. I click Cancel. This was clearly sent in error. My hard drive was fine just yesterday, wasn’t it?

Twenty minutes later it becomes obvious that my last-ditch effort to backup my data has failed. No reading. No writing. I am in Recovery Mode.

I have a Windows machine, so that means my backup options aren’t exactly straightforward. I have three backup schemes in place: an old backup of all my data from about two years ago on an external hard drive; a cloud backup called Carbonite; and a spotty Norton Ghost that runs sometimes and doesn’t run others. None of them are ideal, but it looks like between the three I am covered, but not without weeks of labor sifting through and reorganizing files. (I can’t convert to the Mac fast enough. )

What backup schemes do you have? Any advice? What has worked for you?

I live in Seattle. Finding fine Mexican cooking around here usually involves staking out the vacant lots downtown for the taco stands that appear around lunchtime. So, okay, I’ll admit, I’m not averse to making a run for the border, now and again.

Unlike McDonalds, where you can expect the special sandwiches like the McRib to come back again, you know, during rib season, at Taco Bell you might fall in love with some sublime delicacy like the Beefy Nacho Burrto, only for it to disappear quietly, never to be tasted again.

Taco Bell, my dark mistress. Why? Why?